In another post we looked at using a logistic curve (S-Curve) to estimate the total number of deaths from Coronavirus in China.

In another post we also looked at using a quadratic function to fit the reported death data.

Clearly the above S-Curve has half the final total at its half-way point at (0,0.5).

A scaled S-Curve will retain this feature.

The official death figures can be found at:
https://www.worldometers.info/coronavirus/ 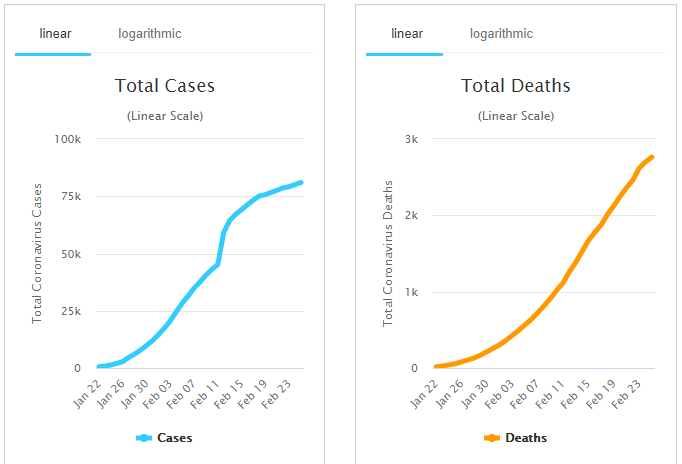 To estimate the final death total, all we need to do is first look at where we think the half-way mark is, and double that number. We assume this will occur on a half-day.

We can calculate the estimated final total for all days that may be a suitable half-way mark then compare this to the number of deaths for the current day.

In a post on Monday of this week I calculated this number to be 4,135 deaths using data from 19 February (and 18 February). This total now appears too high, so we looked at data from earlier days.

Data from 14 February (plus 13 February, d=23 and d=22, where d is the number of days after 22 January 2020) gave an estimated total of 2909 deaths at a mid-point at 22.5 days (total days to reach 2909 deaths is therefore 45 days). This day (14 February) was initially chosen because it gave the most consistent figure after looking at the paired totals for each day around those dates.

The actual latest total number of deaths (For 26 February; day 35) is 2801 deaths. This includes about 50 deaths outside of China. There were only 38 new deaths on this day.

As in my previous post, we can use the actual increases from before 14 February and add them in reverse order to form an S-Curve.

We can also do the same for a quadratic fitted to the totals.

This produces the following graph:

The following quadratic was fitted by “eye-ometer”:

Adding on the daily increases from the quadratic before 14 February gives 2913 deaths (very close).

We also fit (by “eye-ometer”) the following Logistic S-Curve to the data:

This eventually also gave a total or 2909 deaths (some days after day 45).

Here is the new graph combined with the previous graph:

Note the colour change in the above graph.

An S-curve appears to be suitable for representing the data.

From the official data it appears the final death toll in China from Coronavirus is unlikely to be less than 3000, assuming no new outbreak in China.

Already the current total (for 27 February) is about 200 more than the calculated estimates.

So the the most likely estimate for the final number of deaths appears to be between 3200 and 3500 deaths.